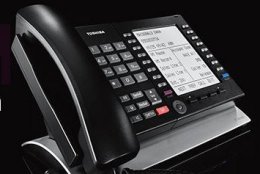 Under its new “Trade Up to Toshiba” programs, legacy customers of its Strata DK and Strata CTX business telephone systems can affordably trade up to Toshiba’s VIPedge cloud-based, IPedge and Strata CIX premises telephone solutions.

Moving to Toshiba’s VIPedge and IPedge solutions help businesses comply with Kari’s Law (S. 2553), which is pending in Congress and is expected to mandate that 911 calls be made without first pressing ‘1’ or ‘9’. The “Trade Up to Toshiba” promotion runs through March 29, 2017.

Kari’s Law is named for Kari Hunt, who was killed by her estranged husband at a motel in Northeast Texas in late 2013. Her nine-year-old child tried repeatedly to dial ‘911’ from the motel room’s phone but was not able to get through as the motel required dialing ‘9’ to get an outside line.

Toshiba is offering three “Trade Up” programs that will help businesses comply with Kari’s Law.

Contact ACC Telecom to discuss your Toshiba trade-up options. Send an email to solutions@acctelecom.com or give us a call at any of the following numbers: